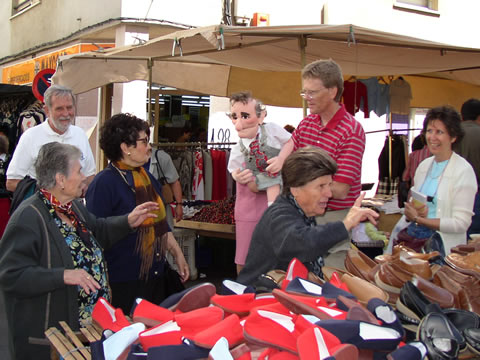 At age 12 I wanted a set of drums for Christmas. I was constantly banging my fingers on tables and whatever else was handy so I figured I was a natural. Instead of a set of drums I got a ventriloquist dummy and a “teach-yourself ventriloquism” record. I was a skinny, pale, freckle-faced kid without a lot of friends or self-confidence, and the biggest thing about me was my glasses. So, I figured having another friend wouldn’t hurt, even if he was a dummy. He didn’t reject me and we got along reasonably well.

For hours on end I faithfully listened to that scratchy record and I sat glaring into a mirror practicing talking without moving my lips and making “Danny” come alive. We were sort of like the old man and Pinocchio, only Danny’s nose didn’t grow longer when we lied. After getting the hang of it, I entered a couple of school talent shows hoping that ventriloquism would be a chick magnet.

Unfortunately the babes were attracted more to drummers than a skinny kid with big glasses and a doll on his knee, so the boy bands got the girls although I won the talent contests. I still dreamed about drums and girls screaming and swooning when I pranced onto the stage. Instead I ended up on the “talent spotlight” of a local Saturday afternoon television show. After performing my gig I was interviewed by the show’s host and asked if I made any money performing at parties and stuff. That had never crossed my mind, but cash registers started ringing in my ears so I answered, “You bet I do,” and I tossed out my phone number to the world. Fortunately Danny’s nose didn’t shoot out a foot, but I did start getting booked for parties and bashes in homes, civic clubs, fire departments, schools, libraries, and even once at the North Carolina Doctors Association Christmas Party. I had arrived. I was finally somebody. I still wasn’t sure who, but I relished the cash flow.

More years than I’d like to count have passed and many dummies have worn out since those humble beginnings. I never got the drums, but I did get the girl and some cooler glasses. I seldom travel now without Junior, Eugene or one of my current alter ego. We try to take a unique and creative approach in presenting missions and the gospel to audiences of all ages, and communicating the message of how to live out the reality of “Christ in me” in everyday life. We have ministered both nationally and internationally to audiences of all ages in Sunday schools, church services, missions meetings, Bible Schools, seminaries, summer camps, conferences, evangelistic services, county fairs, and in both public and private schools and even on a couple of ships.

My buddies keep their bags packed and love to travel with me. It hardly phases me anymore when one of them wiggles out of the suitcase to strike up conversations in airports, on planes, trains, streets corners, and taxis. The problem with them, except for Kelly Sue, is not getting them to talk; it’s getting them to stop once they start! I take no blame for that.

The irony of it all is that Junior and Eugene have turned out to be the chick magnets. Maybe I should get them a set of drums.

For information on the Dalits:  http://www.dalitnetwork.org/

For information on ministering to persecuted Christians:  https://www.opendoorsusa.org/
Also:   http://www.persecution.com/

For information on Operation Mobilization:  http://www.om.org/

Junior is, well, Junior. Saturated with self-confidence, convinced that everybody adores him, proud of what he regards as his “movie-star good looks,” and antsy to have a good time at the drop of a hat...

When questioned about the benefits of being 102 years old, Eugene replies, “No peer pressure.” Just bringing Eugene out of his suitcase gets instant laughs from any audience he appears in front of...

“If you look up the word loser in the dictionary,” sighs Kelly Sue, “My picture would be next to it.” To say that Kelly Sue doesn’t like herself is the understatement of the year...”